Initial sketches from the patent show that the phone has a rectangular space for a camera, but that space can be filled in with a casing if you want to use the built-in camera without the lens attachment. 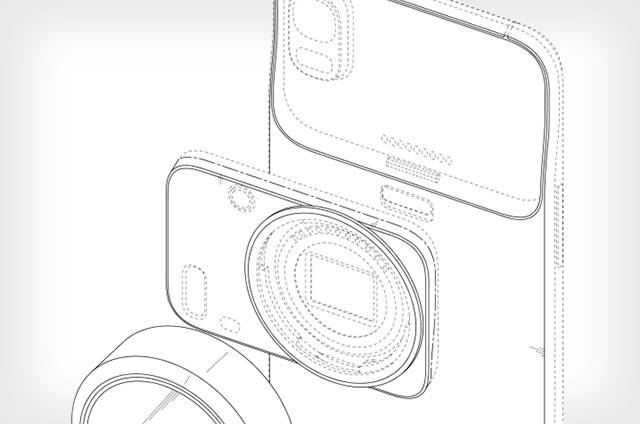 Samsung has filed a patent that allows you to attach a modular system onto your smartphone. The patent would allow Samsung to offer phones via a modular system that can have an oversized lens attached to the back of the phone’s camera.

Initial sketches from the patent show that the phone has a rectangular space for a camera, but that space can be filled in with a casing if you want to use the built-in camera without the lens attachment.

The phone would allow for the back panel to be removed, and a different sensor and lens mount to be attached to the phone itself. Anyone who’s currently using the iPhone or Samsung Galaxy to capture stunning photos will be able to take much more precise, high-resolution photos using just their phone.

It’s an interesting time for the patents to be discovered as Samsung has been rumored to be leaving the standalone camera business in recent months.

The sensor looks to be a 1-inch sensor, much like the NX mini, but this is all speculation gathered by looking at the patent photos. Samsung hasn’t released any information about this new modular patent, so users are speculating as to what the camera may offer in terms of functionality. Many believe that the final version may have a sensor that rotates, so users can take portrait or landscape photos with ease.

Project Ara is a similar Google project that uses the modular smartphone concept. This project allows the phone to have interchangeable add-ons placed on it, much like what Samsung is trying to do with its patent. This would mean that your phone would be able to outperform many standalone cameras on the lower end.

Interestingly, Samsung recently made the announcement that while they’re leaving the mirrorless camera (click here if you don’t know what that is) market, the company will be looking into emerging technology markets. Smartphones aren’t exactly an emerging technology, but it would be a new market for the company to enter into. Competitor Apple also filed a patent last year for interchangeable lenses that would be able to be placed on the company’s iPhone lineup.

Rachel Noël is a professional photographer and videographer from the UK with over 10+ years of experience. Rachel specializes in Underwater, Tavel & Portrait photography among other areas.