Whether you are talking about any sort of camera work, the rule of thirds is one of the most well-known remarks regarding composition. 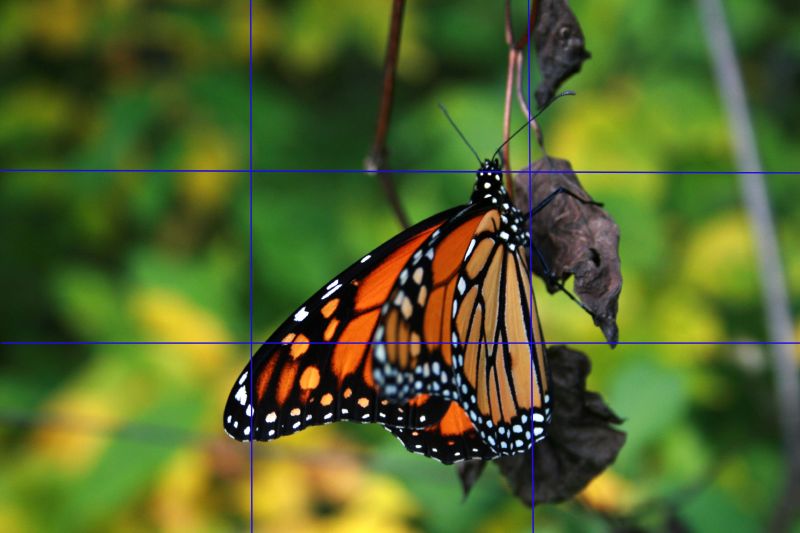 What is the Rule of Thirds?

Not to be confused with comedy’s “rule of three,” the rule of thirds is an approach to composition that treats your lens as three vertical and horizontal lines, yielding a 3×3 grid with nine equal parts.

These thirds can be used to great effect with life photography as you can frame things in such a way that your subject is looking into other parts of the scene. By properly framing your shot so that the subject is in one or more parts of the grid and their attention is pointed to another grid segment, you can create an overall more evocative image and increase visual interest.

Two thirds of your shot should be negative space and one third should be of your subject.

When it comes to getting into photography, most people tend to capture their subjects from the center. This is doubly the case for those of you who are into photographing wildlife as some shots are only going to come to you once in your life; better to get one inferior shot than never capture it at all. Studies show humans naturally view images at the “power points” of the rule of thirds grid lines.

If you plan to snap a photo that adheres to the rule of thirds, you definitely need to give your shots enough space to fine-tune everything in post with some judicious cropping. While there is always the chance that you’ll get everything composed perfectly, most photographers will do a bit of tweaking to nail it down; sometimes correcting the frame by just a few pixels can make a world of difference.

If you seem to have trouble obeying the rule of thirds, consider taking your shots with a wider lens. Shooting with a wider lens means that you have more space to frame the object of your subject’s attention. Zooming in to your subject as close as you can get is not always something you should be aiming for.

If your photographic focus is found more in the realm of landscape photography, you have an even easier time getting that perfect shot; those majestic mountain peaks are not poised to fly off into the horizon in the blink of an eye. With landscape photos, the ideal approach is to go for a 2:1 ratio of land to sky or sky to land.

For example, if you want to get a good photograph of a sunrise or sunset against the ocean, you would want to either make the sunset occupy the majority of the shot or make the ocean the majority in cases where you capture the last brilliant vestiges of the sun before it dips below the waterline.

Another trick that you might want to consider is if you have access to a lot of vertical lines. In these cases, such as with a garden with tall flowers, you might consider framing everything so that the tall stalks naturally overlay with the vertical lines of your grid. Another idea of this sort of “implied gridding” would be if you are presented with an armory, with many swords, axes and such; you could position a subject in such a way so that it is naturally framed by two mounted weapons.

Lastly, you can use the four intersection points of the grid lines, known as “power points,” to serve as the focal point of your shot’s subject, be it the key elements such as the head of a person, an animal’s eyeball, a flower or even the prey captured in a predator’s jaws.

Advice for Perfecting the Rule of Thirds

If you want to improve your photography & grasp the rule of thirds in your photography, it just so happens that there are several things that can be done. While the pros can gauge their frame with the naked eye without the rule of thirds guidelines, a novice or intermediate-level photographer will likely need a bit of help by using the grid lines. Once you take enough photos, you will eventually gain a good sense of which shots “feel” right. If you look at your old work and begin to get an unease feeling as you study their frame, that is a good sign that your sense of a proper composition is improving.

The first thing you might consider is that many cameras now feature a rule of thirds guidelines with the viewfinder to give you a proper visualization of the thirds. Indeed, you would have a hard time finding a camera without this feature when even an iPhone has it as an option to take photos with the rule of thirds guidelines. Look through your camera’s menu and play with whatever overlays exist to help with your composition. This feature can be a major boon when you have to shoot and move at the same time.

Another tip is when you go into your editing program to crop your files. Many of the more prominent photo editor programs, including “Lightroom”, “Luminar”, “Photoshop”, and GIMP (which is free) include a 3×3 overlay in their image cropping section. If you aren’t good with photoshop you might want to consider taking an online course that would help. Knowing how to use photoshop & lightroom is crucial to getting amazing photos.

When Not to Use The Rule of Thirds

Just because the rule of thirds is an exceptional way to optimize a shot’s composition and has been a staple of photographers since the 1700s, there are going to be moments where even this fixture can be more of a hindrance than a boon. Not every type of photo can be improved by trying to align it to the grid. In light of this truth, it might be more apt to call this “rule” the “guideline of thirds.”

For example, you might have the chance to capture a darling little puffin looking straight ahead and directly at the center of your grid. While rigorous adherence to the rule of thirds might compel you to adjust everything so that the puffin is somewhere off to the side the end result would pale in comparison to one where you have a curious puffin adorably staring down the lens. In this case, abiding by the rule of thirds means the overall effectiveness of your photo will be diminished.

It should also be worth mentioning that you can certainly create hybrid images; i.e. the subject can work despite violating the rule of thirds but the background is still shot in such a way that it adheres to that rule. The end result is a central focus of the puffin and a background with the remaining two-thirds terrain and one-third brilliant blue sky.

Then there are photographs whose subjects are so novel that you can completely forgo even a reference to the rule of thirds, like a seal posed in such a way that it seems to be waving “hello”.

Overall, some of the most impactful wildlife photos tend to go for a hybrid approach rather than being framed with just the rule of thirds in mind.

One of the best things you can do for yourself when starting out as a photographer and familiarizing yourself with the rule of thirds is to play around with your composition. While you should play around with the rule of thirds-composition, the keyword is play; do not feel obligated to always stick to it nor completely throw it out the window. When given a scene to shoot, do a bit of comparison by shooting it freely and again within the context of the rule of thirds; this will give you a better feel for which style works best for a given type of shot.

The rule of thirds is one of the best guidelines you can abide by for improving the composition of your photos and giving them a greater capacity to please the eye. That having been said, it is not an absolute of photography by any metric. The two main benefits of adhering to the rule of thirds are to give your compositions balance and a sense of dynamic motion despite capturing a still image.