In photography, different image effects and qualities can occur accidentally, as a result of careful planning or some combination of both. 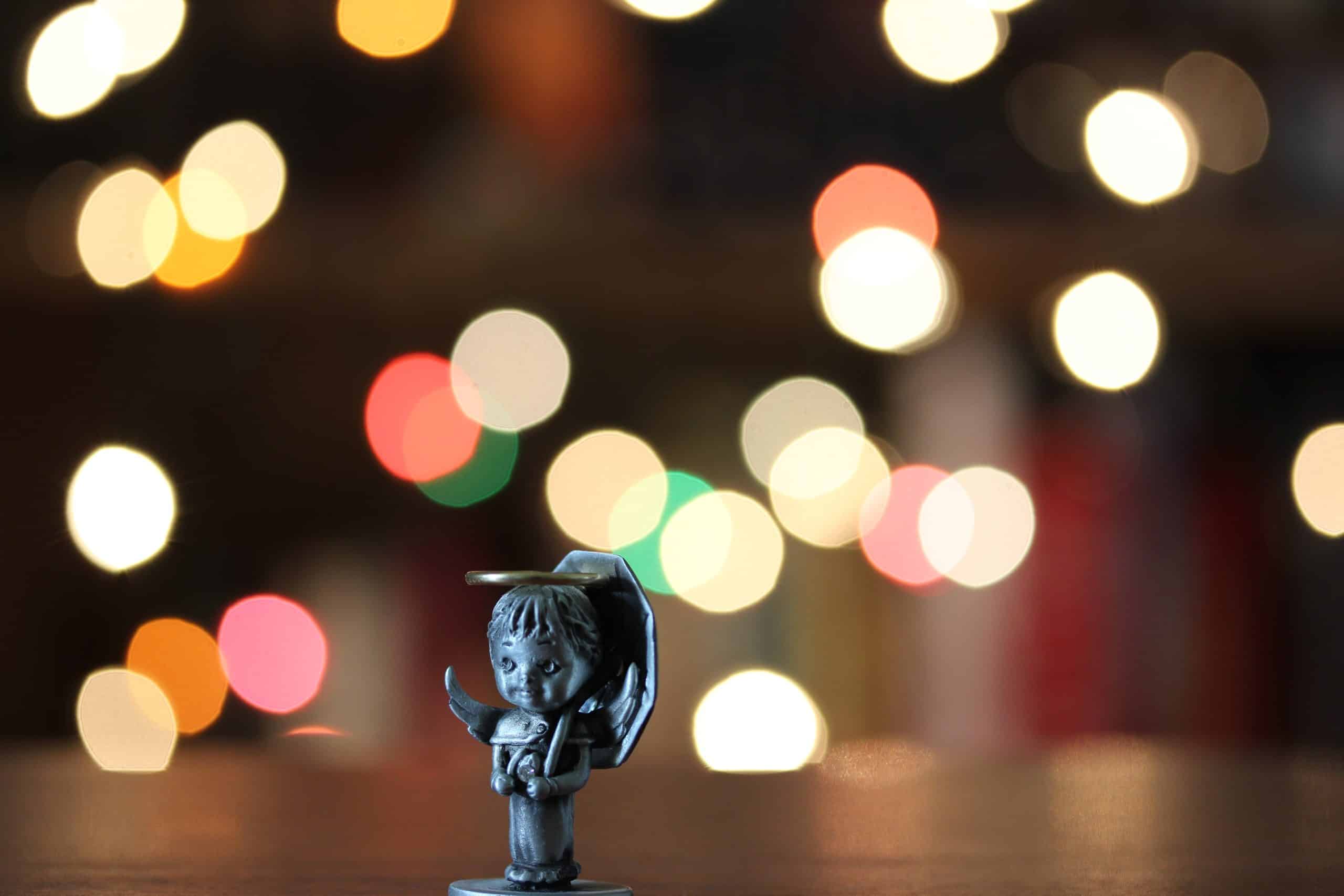 Bokeh fits in the last category. An amateur photographer can take a macro photo and discover afterward that the contrast between the foreground within the depth of field and the background outside of it has pleasing out-of-focus areas and appearance.

A professional can create the same effect by using camera tools and settings. Of course, creativity and artistry also play a role since a professional appreciates how to use their camera, light sources and other elements to make “good” or pleasing bokeh.

What Is Bokeh Effect?

The word, pronounced bō-kā, is derived from the Japanese word “boke” or “blur” and refers more to the aesthetic or feeling related to the effect than the actual blur quality.

Bokeh describes a pleasing out-of-focus blur or hazy effect or quality in a photograph, typically in the background, that you can achieve by using various methods. Essentially, out-of-focus areas and background pleasantly highlight a clearly focused foreground.

The area of the image that has the effect is outside of the depth of field that contains the in-focus of the image. The total effect varies widely depending on many factors. The background blur can look creamy and subtle, swirly, coarse, circular, or heptagonal.

It can also contain soft, reflected lights. It’s important to keep in mind that good bokeh must appear smooth and produce a pleasant contrast between the blurred area and the person or object.

Photographic images aren’t the first to contain bokeh in the history of human art. Bokeh merely describes the effect that has become increasingly popular in recent years with photography.

Painters often used a similar effect on canvas and other forms of painted and drawn artwork. They would make their foreground subjects incredibly focused and detailed and produce a hazy background that contained less detail to produce a pleasant contrast.

With the creation of lampposts and eventually street and car lights, more artists utilized the effect and made these sources blurry and circular shape in paintings.

Modern artists now attempt to recreate the photographic effect of bokeh so that their paintings look like quality bokeh photos.

Hobbyists who love to paint can recreate great bokeh photos using a variety of paints, including acrylics, oils and watercolors.

Many photographers continue to debate not only the differences between “good” and “bad” bokeh but also if bokeh refers only to the blurred area or the entire picture. Yet, there’s no doubt that “good” bokeh refers to an experience. It means that when someone looks at the contrast between the subject that’s in focus and the area outside of it, they feel that the contrast or the overall look of the photo is great.

Qualities of good bokeh can include smooth transitions in the blur and soft edges on highlights and light reflections, as seen with round bokeh and heptagon-shaped bokeh, and an overall soft texture.

With ugly bokeh, the contrast and overall quality of the image feel wrong. In a bad bokeh image, hard, discordant transitions might exist in the blur or between it and the subject and textures or even colors between the two might clash.

In a bokeh image, highlights and reflections can again appear as rounded or heptagon shapes. Some people actually confuse them with a lens flare, which creates a similar effect. Yet, lens flares occur when light becomes dispersed or scattered when it hits the lens.

Another similar comparison is made with shots that involved water striking the lens. In those cases, the droplets can possess a bokeh feeling by accident since they reflect light, which then makes them appear to have a similar form as lights in bokeh shots.

With purposeful bokeh, adjusting the focus away from the light source creates soft rounds or bubbles and heptagon shapes based on the lens design. These shapes aren’t always uniformly fuzzy.

Depending on the level of spherical aberration in the lens, they can possess spots within them of higher illuminated intensity and reduced haze. Of course, photographers can also make their own bokeh shapes, such as diamonds, hearts and stars, by masking off part of the lens.

An extreme depth of field that is shallow is a standard bokeh element. Typically, the size and shape of the field and overall effect of bokeh are achieved based on the shape of blades of wide and fast prime lenses (f/2.8, f/2, f/1.8 and f/1.4). Many photographers rely upon macro and telephoto lenses for bokeh since they’re designed to provide such an effect.

Do You Need a Fast Lens?

That said, a fast lens is not always needed. Youcan achieve bokeh with narrow, slower lenses, such as f/8, as long as the distance between the nearest and furthest object is shallow or the subject of the image and the area outside of the area of focus has a lot of distance and focal length between them with no objects six feet behind the subject.

Bokeh also improves when the persona taking the picture is closer to the subject as with macro shots. Any highlights on the background from the side or back can make the bokeh more visible.

Best Camera Lens and Other Settings for Bokeh

Amateur and professional photographers alike can achieve bokeh with the appropriate tools and settings. Depending on the level of comfort, most photographers use one of several settings.

Some cameras, especially on modern cell phones, offer “bokeh” settings that allow people to adjust before and after taking a photograph. Before adjustments, the app does all of the work and the user merely needs to point, focus on the subject and shoot.

Many photo editing programs also allow users to produce the effect of bokeh in their saved digital photographs. These settings are often marked as “blur” or “bokeh.”

Best Background and Setup for Bokeh

Beyond settings, you must consider the setup in front of the camera. For example, you must place the camera within a straight line of sight of the subject instead of attempting a top-down shot to produce the best contrast between the subject and the background. If you’re uncertain about the best background, you should consider the options that can give you the effect, color and texture you desire.

Many photographers recommend that people not use white or any color that might not blur well or produce too much harsh contrast. They often use dark or multicolor backgrounds or lights outside of the area of focus to produce good bokeh since the colors and intensity enhance the effect.

Backgrounds that contain moving objects, water or anything that reflects light is also preferred to bland backgrounds. The key thing to remember is that a person must look at their camera’s display before they take the shot to make certain that they’re achieving the contrast they desire.

When to Choose Bokeh Effects

If a person needs or wants a close-up shot with a blurry effect around it or in the background, then they should consider focusing their time and attention on creating the effect of bokeh since blurring without an emphasis on achieving bokeh can make the subject of the image look bad even if the focus on the subject is clear. Also, photographers often use bokeh for portrait photography, especially young children and business professionals.

You can also attempt bokeh photography when performing macro or big, close-up shots of insects, birds, flowers and other objects designed to bring out details that might otherwise appear blurry because the subjects are small or in motion. In addition, many people like to photograph brightly lit background objects out-of-focus to make them less bright or harsh, such as light sources.

Some people even produce bokeh shots with that it seems like the entire image possesses a soft blur, as seen with decorative images and shots of a single word or line of text on a book page.

Images for any special event can look great with the bokeh. That said, people use bokeh shots most often for portraits and certain personal and holiday events. For example, someone might use bokeh for an outdoor shot of a bride standing with a natural setting behind her. This type of image makes the bride appear magical or gives the environment a magical or fantasy aesthetic quality, which matches the theme of many weddings.

During the winter holidays, a person might photograph a Christmas tree covered in string lights in a way that each light has the rounded bokeh effect. Bokeh also works well with shots of children and small pets in seasonal outdoor settings during holiday events and birthday parties.

Once a person becomes skilled at creating bokeh shots, they can make the effect of bokeh between the depth of field and the area outside of it good enough that a child or pet stands out in an incredibly cute or fun way.

It’s impossible to talk about the bokeh without discussing the statement a photographer might make with bokeh or the impact that the effect has on the emotions of a person looking at the image.

As already mentioned, bokeh can give an image a magical or fantasy quality and can influence how a person feels about small children and pets. The haze in the background can also make it seem like the person or object of the photo is within a dream landscape.

Bokeh influences people in other ways. Some photographers again mask their lens to create unique shapes for beautiful bokeh shots. One trend seen in the business world is bokeh quality shots that contain dollar bill symbols.

These types of images hung up in a business can motivate, for example, customer service, office and sales workers because they make them feel like the dollars in focus (i.e. money) as part of the dream (hazy background) of increased wealth is possible.

As revealed in this guide, a person doesn’t need to be a professional to make beautiful bokeh images. You merely need a great lens and the ability to recognize the types of contrast that you are capable of creating using various hardware, software and subjects.

The bokeh effect also requires an imaginative approach. As noted at the beginning, people achieve bokeh both by accident and by exerting their will. As a result, many people have created bokeh using an approach that falls somewhere between those two areas.

You might photograph the same person or object a dozen times until you make that “good bokeh” shot that makes you feel like you’ve successfully captured a pleasing contrast between the subject and the blur zone. You might also discover that you can’t achieve the shot you want without altering the image digitally using the software.

Although some people might frown upon the thought of using software in order to make bokeh because they believe it generally doesn’t look as good but remember that photography is an art and that the end product, the dream envisioned by you, the photographer, is all that truly matters.